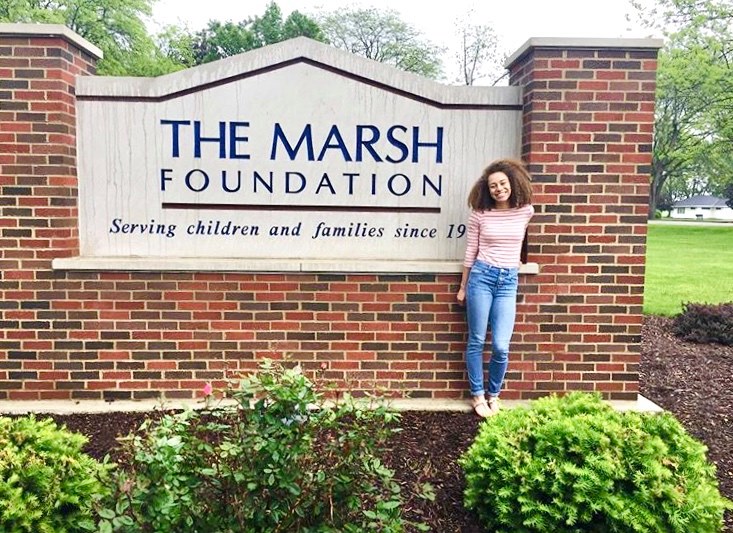 VAN WERT, Ohio – Every child that is placed in a Marsh Foundation foster or group home has their own unique story. Each child uses their experience at The Marsh differently. Tori Petersen has used her year at The Marsh as a catalyst for advocacy and raising awareness for the restoration of family. Now a wife and mother, she has faced a challenging road to success.

When she first arrived at The Marsh Foundation, Petersen said she felt like she didn’t belong, which made her even more bitter and angry. However, after some counseling sessions she began to see how her upbringing was affecting her. “She [counselor] was so sweet to me but she was also very serious about showing me how my mental health and behaviors could be better. I realized I had a serious anxiety issue and had never addressed any of the trauma I had faced while living with my abusive biological mother,” she said.

At the age of four Petersen went into foster care because her mother was selling drugs with her boyfriend. Prior to coming to The Marsh, she was deemed ‘unplaceable’ by her caseworker. According to Petersen, one of her biggest lessons while in the group home was that she had leadership potential. “One of the most impactful ways The Marsh Foundation changed the way I viewed myself, is that it framed me as a leader. For the first time, I understood that I was a leader and I led the young women through my choices and actions. A person’s behaviors can change an entire culture,” she said.

“It was at The Marsh that I came to understand that hurt people hurt people, which made me grow in empathy,” she said. “But I witnessed healed people heal people; and as I stepped into the genesis of my healing journey, I wanted to do whatever work in myself necessary to contribute to the latter. I lived with nine other young women who had severe mental health issues or poor behaviors and I knew I could either be a part of the hurt or the healing.”

The lessons she took with her were many. This isn’t to say that all of Petersen’s difficulties were immediately and permanently resolved. She said she has realized that her reactions to situations are often severe. “Words of affirmation send me soaring while criticism pummels me to the ground. Neither reactions are healthy,” she said. Though this remains my greatest struggle to date, it was at The Marsh Foundation I became aware that my mom’s words in her times of mentally-ill-mania damaged me and I had, and still have, a lot to heal from.”

When asked for words of advice for today’s youth, she said that suffering can lead to positivity. “Adversity will sharpen you,” she said. “Use those sharp edges to sharpen yourself and others, rather than cut people the way people cut you. The things we do don't have to be big and grand. Most of our glory is not found on the stages or when everyone is watching. It is hidden in our rooms, during the times it is easiest for the trauma to show its face.”

Petersen and her husband Jacob have a toddler son and are expecting a baby girl. They mentor and foster a young man who was at risk of deportation. They are also currently working to launch a nonprofit with the hopes of helping young people develop leadership and life skills. She uses her voice as an influencer on Instagram @torihopepetersen and torihopepetersen.com where she raises awareness about the foster care system, adoption and family.

The Marsh Foundation is a not-for-profit children’s services agency that provides services in a variety of settings. Services include group homes, family foster care (ages 0-17), an intensive treatment program, adoption and independent living services. Located in Van Wert, Ohio, the organization’s group homes are licensed for up to 30 children ages 7 – 17, offers an on-campus school for grades 2 – 12 and provides a variety of clinical services to group home residents, foster care children and community members.